5/02/2018 : I arrived at the Inceheon Airport just a while ago, I have been here before but today it turns out to be extra ordinarily nice and beautiful. This is my fifth time at Inceheon, it also being the same place outside Fiji the first time I stepped out of my country nine years ago. Seoul is a beautiful place but I wont be able to step out since I’m making just a small transit on my way to Koror – Palau for a national consultation and high level dialogue with decision makers in the small island state regarding the access and benefit sharing under the UN Convention supplementary protocol – Nagoya Protocol on Access and Benefit Sharing. 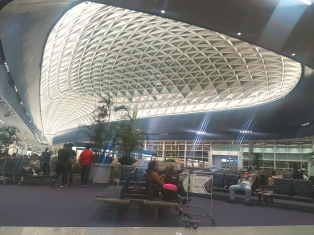 After a long eight hour transit in Auckland – NZ this leg of my trip was deemed to be long and hectic but it turned out to be awesomely superb. I was definitely going to grab some sleep because I kept awake last night trying to charge my laptop and phones so that it can be useful on the long haul flight. I have traveled Korean Airlines in Nadi – Seoul route and had been very impressed but Auckland – Seoul was even one notch higher.

I was able to order Jain Vegetarian meal that promised me meat, fish, dairy and egg free diet with assurance of no gelatin, lard or onions and garlic in the meal prepared for me. The food turned to be very tasty with combination of flavors and mix varieties of fresh vegetables and grains. They were nutritious, wholesome and very satisfying. The long eleven hours suddenly seemed to be fairly short one once I got on board because of the level on cabin comfort, care and attention give to passenger details.

Now after a short transit at Inceheon I shall be boarding again to link up to Koror which is six hours flight time from here. Im looking forward to taking some rest on Sunday since I will gain a day in Palau even though I have already gone past Saturday midnight while still in air.

In Palau, we have a tight schedule with meetings planned with senior government officials, natural resource owners and planning officers and I hope to achieve a lot from these dialogues. From what people have described me about this island state, Im very much looking forward to enjoying their beautiful pristine environment and hospitality and friendliness of their people.  Till then, moce mada !!!